This blog only covers a portion of our birding experiences in Ohio.  We attended the Biggest Week in American Birding, which occurs in Northwestern Ohio, but I will be posting that event separately.

We crossed back over the Ohio River from Indiana and into Ohio.  We saw a sign for the Ohio River Islands National Wildlife Refuge (NWR) and turned into a Corp of Engineers campground and boat launching site – how else are you going to get to the NWR?  A stop to let Doodlebug out to stretch her legs was in store.  And so why not bird while we are there.  We got some great birds in a short period of time, including FINALLY a Gray Catbird.  We haven’t seen this species since we were in Arizona in January.  We usually see the bird in Missouri, but not this year.  We also heard a Northern Bobwhite – close by camouflaged  well in the vegetation.

We arrived at our campground – Burr Oak Cove – located in the Wayne National Forest.  This is a small campground with only 19 spaces.  Despite the few number of spaces, we are the only ones camping here – so far.

As soon as we got to the campground I had to check out the birds singing and found an Indigo Bunting and Yellow-breasted Chat.  I think I’ve seen more Chats in the past week than I’ve seen all my years birding.  Guess I’ve never been in the right part of the US. [I later heard Yellow-breasted Chats aren’t doing well in the east, but are doing well in the west.  Go figure.]

As I was cooking dinner I heard this bird with a nasally buzzing sound at the end of its call.  I finally located it high in a tree – a Blue-winged Warbler.  Woohoo – Trip Bird (FOY).  I tried to get Jack on the bird, but to no avail.  Sorry Jack.  That bird just kept hopping and flying around in the tree.  Lighting wasn’t good either.

After dinner I went walking up the road (through the campground) to see what birds I might find.  I heard a Wood Thrush so stopped to see if I could find it – no luck.  But while searching for the bird I heard this screeching sound in the brush just off the road.  I saw movement so decided to check out what was making that noise.  I saw two Blue-winged Warblers, a Yellow-throated Warbler, a Hooded Warbler, a Yellow-rumped Warbler, a Blue-gray Gnatcatcher, and a Carolina Wren.  Still not sure what was making the screeching sound.  I couldn’t believe my fortune in seeing all these birds at practically eye level – in fact I had to look slightly down to see them.  Unfortunately, Jack wasn’t with me.  Tomorrow we will walk the road again in search of birds. I hope we are both fortunate to see more Warblers and the Wood Thrush. 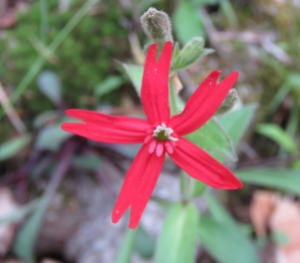 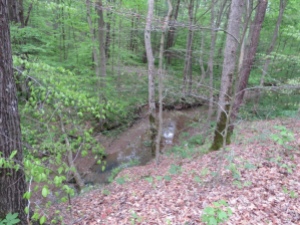 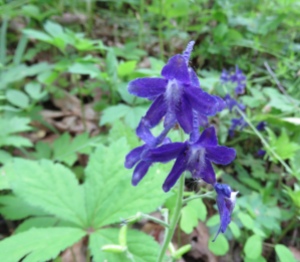 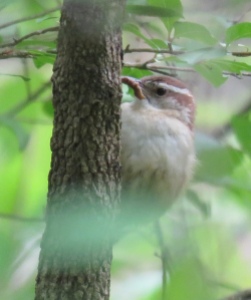 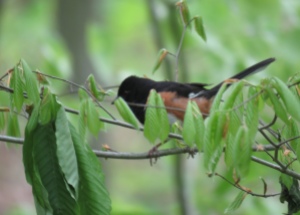 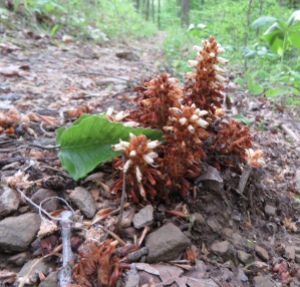 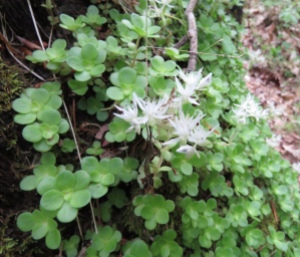 Around 3:30 am two Barred Owls started calling back and forth. I got out of the van with my flashlight checking the trees as these sounded like they were right above our heads.  No luck.  Darn.

During the morning we birded the campground and then took a hike on the Lakeview Trail, which begins in the campground.  We didn’t quite make it to the “lakeview” as it started to rain and we weren’t prepared for it having left our raingear back at the van.

At the walk-in campground sites we did finally see a Wood Thrush.  Always nice to see the birds we hear.  This one was high in a tree.  Didn’t expect to find it there.  I spotted a Hooded Warbler and was able to get Jack on the bird – but only briefly before it took off.  We spotted about 23 different species in the campground and along the trail this morning.

After lunch we drove over to nearby Burr Oak State Park.  We wanted to check out the campground (ours is much nicer, I think).  Stopping in the campground we  heard a number of birds singing in the rain.  We spotted tons of Yellow-rumped Warblers (need to check each of them out to be sure they aren’t a different warbler species).  I saw an American Redstart and was able to get Jack on the bird.  I’ve seen this species twice before in the past week, but Jack was never able to get on the bird both times.  So two new warblers today for him was great.  We also saw both the Summer and Scarlet Tanager and the Baltimore Oriole.  Nice to see color and large birds.  Makes birding easier at times.

As we were driving on the road leading out of the park, I asked Jack to stop at a pull-out.  I heard birds singing so thought, “why not give it a try”.  Oh I am so thankful I did.  Finally, I spotted a Cerulean Warbler!  I’ve wanted to see this bird for years.  I think I might have seen it in Colombia when I was there in 2015, but I wasn’t a 100% positive.  Today the bird we saw was definitely the Cerulean Warbler – no mistake, a very good look.  So I danced a little jig and pumped my arms.  This is a life bird for me.  Woohoo!!!  Made my day.  No picture though.  If you want to see what all the fuss is about check out:  https://www.allaboutbirds.org/guide/Cerulean_Warbler/id

We stopped off at the day-use area to check out the birds there and found a Gray Catbird.  Nothing special about them color-wise – black, gray, and rust, but I so love these birds.  Also saw a Bald Eagle.  I think we’ve seen a Bald Eagle in almost every state we’ve been to this year.  Nice to see they’ve made such a great comeback in the lower 48.

Cinco de Mayo.  Will have to eat Mexican food for lunch today  Yum!!!

We birded the campground for a couple of hours, finding an Ovenbird and another Cerulean Warbler – Woohoo!!!.  What a beautiful bird.  At first I thought it was a Blackpoll Warbler, but the song was all wrong.  When I played the song for the Cerulean Warbler – Bingo!!!  When I got a better look I could see the necklace for the Cerulean.  Ah, so nice to see the bird a second time.

We did stop for Mexican food, which was tasty and then continued on to Cleveland to visit with Jack’s sister and her husband.  We traveled and arrived with wet, windy skies.  The rain hung around for the next two days of our visit.  It wasn’t until we left on Sunday morning did the sun come out.  I will admit I am a sun worshiper so once the sun came out, I was a very happy camper.  Now on to the Biggest Week in American Birding.