On Saturday, 11 July 2015, Jack and I decided to go checkout the shorebirds along the Anchor Point Beach and the Anchor River.  When we neared the parking lot at the end of the road, there were cars on both sides.  And both parking lots were full.  Must have been a good day to fish.  Indeed, a calm ocean framed under a sunny, blue sky with some of those huge clouds that stir the imagination, warm, with winds less than 5 mph.  Beautiful, perfect weather for a beach stroll.  On the beach the boat trailers were stacked up in two rows – a first.  There must have been over 30 trailers on the beach.

Road to the parking lot 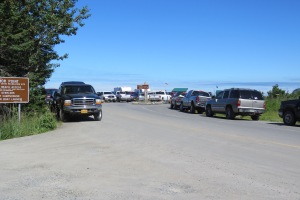 Main parking lot near where the boats launch

What was surprising, especially with dead fish carcass remains scattered about, was there were few Bald Eagles present.  I only counted four – two adults and two juveniles or immatures.  Last time I was out here there were at least 20 Bald Eagles searching for Halibut and other fish remains the fisherman throw overboard and subsequently wash up on the beach – at least that is what I assume they do.

There were a lot of gulls on the beach – a conga line of a mixed flock of over 500.  Most of the gulls were Glaucous-winged Gulls, but there were also Herring Gulls, Herring x Glaucous-winged hybrids, Mew Gulls, at least one Black-legged Kittiwake, and the OMG kicker! three Caspian Terns.  The Caspian Terns were quite the surprise.  In our old stomping grounds of  Oregon the birds are considered nuisance birds (to some people -not me) along the Columbia River, nesting on dredge spoil created islands, were they breed and partake of salmon smolts migrating to the ocean.  But in Alaska the birds are rare, although there are more and more sightings annually.  This is one big tern.

Mixed gull flock on the beach 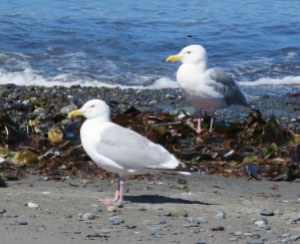 Glaucous-winged Gull and Herring Gull (or hybrid?). Notice the difference in size, the wing tips, and the eyes.

Caspian Tern with the gulls.

A large flock of Turnstones flew onto the beach.  In addition to the Black Turnstones, I did spot 1 Ruddy Turnstone.  There may have been more, but a free-wheeling 4-wheeler (ATV) came roaring down the beach right next to the shoreline, flushing anything in its path – obviously not a birder….  I estimate there were over 100 turnstones in the flock.

We continued down the beach and occasionally spotted a separate small flock of Black Turnstones.  They never did stay in one place long enough for me to get close for a photo op.  Of course one can never have too many bird photos.

At the end of the beach and the mouth of the Anchor River, I spotted several people camping.  This is the first time I’ve ever seen anyone camping at the mouth.  Most likely they are people fishing the river, although there was one boat trailer parked there also. 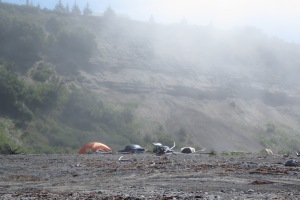 Campers at the mouth of the Anchor River. The fog was coming in and out while we were at the beach.

Jack is getting over a cold so he didn’t walk to the end of the beach with me.  Rather he found a nice log and decided to just enjoy the sun and the birds.

… oh what a beautiful day

On the way back we stopped at a little wetland along the river.  You can usually find shorebirds here during migration.  We observed two Greater Yellowlegs feeding. 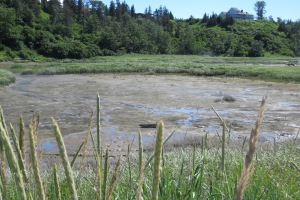 Later, we did see a mixed flock of Black Turnstones – about twenty – and 8 Whimbrels.  They landed several times on the beach but didn’t stay long.  Always some human activity around causing them to flush.

At both the start and the end of our walk on the beach we came across a few Northwestern Crows.  There weren’t as many crows on the beach as normal either.  I also spotted a song sparrow searching for food.  I don’t see many Song Sparrows in the Homer area so always fun to get a glimpse of one.

In all we observed or heard the following 22 species (we weren’t lugging the spotting scope so probably missed some ocean activity).

It was a GREAT DAY TO BIRD

Over the past week I’ve been taking photos of flowers (at Eveline State Recreation Area) and of birds – primarily juvenile (or hatch year) birds.  To me it seems as though there are a lot more nesting birds in our yard this year.  This is the first time we’ve had American Robins nest in or close to our property.  And the other day I saw a Varied Thrush – a first for our yard, although there are numerous ones at Eveline, which is located nearby. 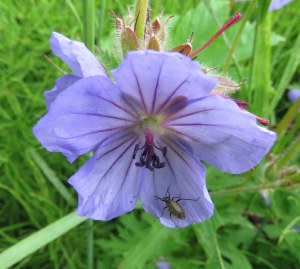 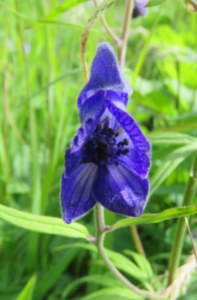 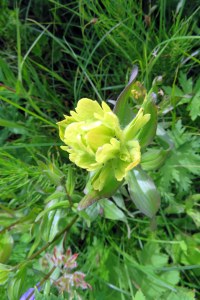 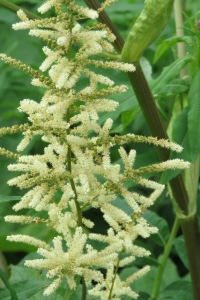 Surprisingly there is little lupine at Eveline this year.  In previous years lupine is found in abundance in the open areas of the park.  Despite the lack of lupine, the park is lovely this time of year with all the flowering plants.  Delphinium, Chocolate lilies, and Monk’s Hood are especially dominant right now.  Once August comes and the Fireweed are in bloom and their leaves are red, the park is again aglow and a flower lover’s delight.

This time of year young birds have left the nest and are learning to feed and fly.  Of our 4 swallow nest boxes, only one was occupied this summer.  This nest box has three holes so that one chick (usually the first born) does not get all the food brought back to the box by the parents.  At one time, we had three swallow chicks with their heads sticking out of the box waiting for dinner.  It was fun to watch the chicks slowly exit the box for the first time and take flight.  Thye didn’t go too far, and ended up back at the box.  They may have been afraid to go back into the box through one of the holes as they sat for a long time (way past my bedtime) on top of the box, and were there in the morning as well. 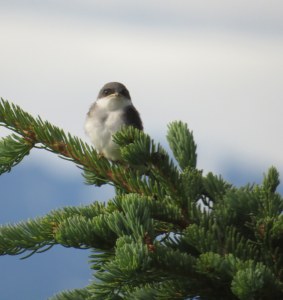 I did watch the fourth, and final chick, exit the box.  Through the scope you could see the bird’s feet on the bottom of the hole.  The bird finally left the nest box and none of the chicks or the parents have been back since.  In about a week or so we will check out the box and see if there are any unhatched eggs or dead babies.  We will then clean out the nest box for use next year.

Other juvenile or hatch year birds observed include the Golden-crowned Sparrow, American Robin, and Gray Jay.  Of course there are also a number of adult bird species still about – Alder Flycatcher, Fox Sparrow, Orange-crowned Warbler, Savannah Sparrow, and Common Redpoll.  This is the first summer I’ve seen Common Redpolls at our house.  Usually we only see them in the winter months. 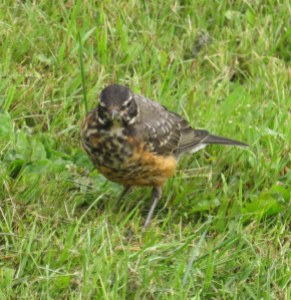 This young bird was searching for worms and other food 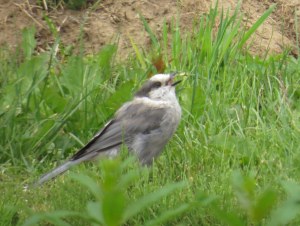 Oh and we cannot forget the other young of the summer – moose.  We have a cow moose with twin calves this year.  They were outside one night feeding alongside the road.  The neighborhood dogs started barking and the moose took off, including this guy (or gal).

If you look closely you might be surprised by all the wildlife activity occurring right outside your door.  Enjoy the wildlife, but keep dogs under control and cats indoors.  This ensure the safety and security of both the wildlife and your pets.

Remember – Its a Great Day to Bird.  Bird On…

On 1 July 2015, I headed to the Anchor Point beach to conduct my COASST (Coastal Observation and Seabird Survey Team) walk.  This is where, once a month, I get to spend a hour or two outdoors walking on one of my favorite beaches in search of dead birds.  Luckily I did not find any this month.   What I did find were 8 species of shorebirds – some returning from their nesting grounds, others who nest in the area (e.g., Spotted Sandpiper).

On the beach near the parking lot there were a lot of gulls and eagles vying for fish parts left by fisherman.  I saw this gull and wondered whether it was a Glaucous-winged/Herring Gull hybrid.

Walking down the beach I came upon a small flock of Black Turnstones and a Western Sandpiper.  Walking a little further along the beach, I flushed a Black-bellied Plover.  I love this time of year when the shorebirds start migrating south to their wintering grounds.  Generally the first shorebirds to leave are the one’s who fail to breed or whose nest is predated or the eggs are not viable (failed breeders), followed by adults, and lastly the juveniles. 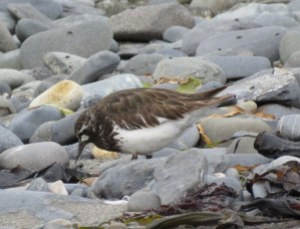 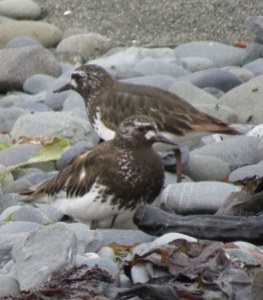 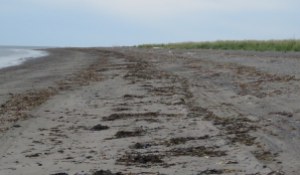 state of the beach – lots more sand than normal

At the river mouth I observed three Harlequins and another duck I suspect is a Long-tailed Duck.  This was a surprise find as they normally winter here, but head north for the nesting season.  Maybe this one liked hanging out with the Harlequins more than its own kind.

Mystery Duck on the left 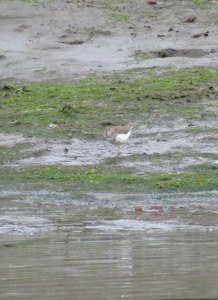 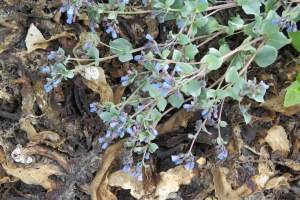 I then headed back to the beach to continue my search for dead birds.  Someone was shooting off a gun causing a mixed flock – of what turned out to be over 100 Surfbirds and over 80 Black Turnstones – to flush.  Fun to watch them soaring along the water and then returning to the rocks to feed and bath.  High tide was around 4:00 pm, but the majority the birds were spotted around 5:00 pm, when the rocks on the beach become exposed as a result of the outgoing tide. 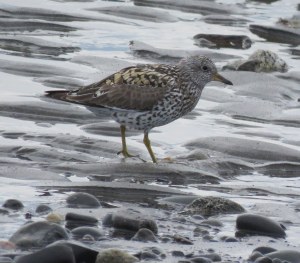 Who you looking at?

In search of food 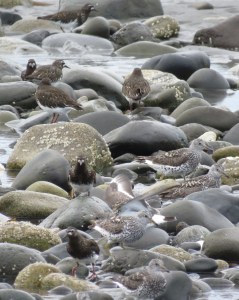 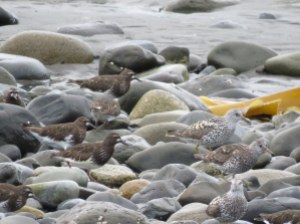 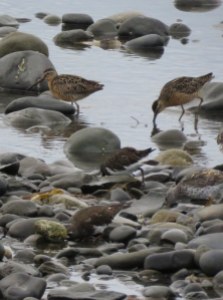 This juvenile gull was snacking on a dead fish carcass

All told I had:

2 Dowitchers (which I presume were Short-billed)

1  Western Sandpipers (and another unidentifiable peep, which may have been the same sandpiper observed earlier)

15 Greater Yellowleg (most along the river)

Not bad for the first day of July.  The shorebirds will be coming through now until early October, with the highest numbers in July and August (based on past observations).  It is different every day.

In addition to the shorebirds, I observed the following species:

Bald Eagles (it is fishing season)

Loon sp. (by the shape [large] and slant [upwards] of its bill I suspect a Yellow-billed Loon – too far away for a decent photo)

I will continue to visit the Anchor Point beach (which was a little crazy with ATVs and vehicles) in search of shorebirds.  I do not call this migration of birds through the area “fall migration” since most of the outbound migration occurs during our summer months.  I prefer to call it just that “outbound migration”.

It is always a Great Day to Bird the Anchor Point Beach – Bird On …..