After visiting Barrow we took off for Denali National Park with the hopes of seeing an Arctic Warbler, among other bird and the ‘Big 5’ mammals of Denali.  We didn’t have any luck with the warbler, although two women on our bus out to Wonder Lake did see an Arctic Warbler at the Wonder Lake Campground.  We wandered the campground but our bus had a short turn-around time so we should have stayed there and caught a later bus, but didn’t – timing is everything…..  Next time we go to the park we will (1) go the latter part of June (supposedly the warblers don’t generally arrive until mid June), and (2) we will get on and off the buses at different locations and check out prime warbler habitat.  And we did see 4 of the Big 5 mammals.

We spent two nights at the Savage River campground,  a nicely designed small campground and one that we definitely would come back to camp.

We went for a short hike to visit one of the old cabins.  Along the way we did encounter some wildlife.  And in the campground we had Gray Jays and Dark-eyed Juncos. 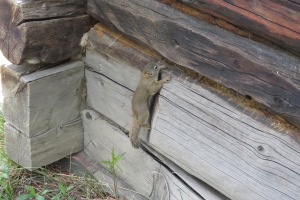 Squirrel trying to find its way into the cabin

A Snowshoe Hare. I call them “spruce bunnies” since they love to munch on spruce trees.

We also went for a hike along the Savage River.  This was a pretty level, easy hike of about two miles.  We did see and hear a number of bird species on our walk including American Tree Sparrows, Wilson’s Warblers, and White-crowned Sparrows.  The Arctic Ground Squirrels were busy chowing down gaining weight for the winter – they are true hibernators and live off their body fat during hibernation.  With a heart beat of two beats per minute they really know how to slow it down during hibernation.

Trail along the river 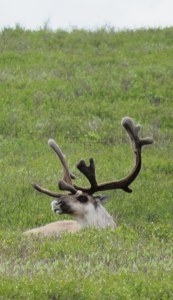 And we cannot forget the Arctic Ground Squirrel. Looks pudgy in the back. 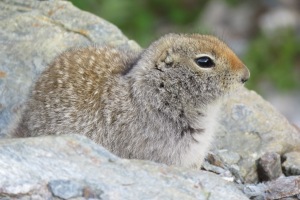 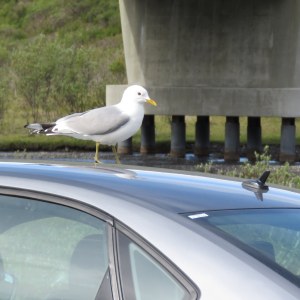 This gull decided to check out someone’s car

We caught an early bus into the park  hoping the wildlife would be out and about and we were not disappointed!  We were treated to the sighting of grizzly bear, including a sow and two cubs, a wolverine (the second time our bus driver has seen one in his 17 years driving for the park), moose, Dall sheep, caribou, and arctic ground squirrels.  Okay, the ‘Big 5’  – Moose, Caribou, Grizzly Bear, Dall Sheep, and Wolf.   Drats, we missed seeing the wolf that the bus ahead of us saw – timing is everything…  Best of all we got to see the ‘Big One’ Denali as we Alaskans like to call the mountain.   Denali (or Mount McKinley as it is known to folks from Ohio) was spectacular.  We were told that our full view of the mountain constituted belonging to the 30% Club – the mountain is often shrouded in clouds since its massif size creates its own weather.   Jack decided that such a reward was worth purchasing a 30% club magnet, now displayed in our adventure van.  Supposedly only 30% of the people who visit Denali ever see the mountain, in whole or in part.  A display at the visitor center showed the mountain visible only two times in July of last year.  We felt fortunate.

Views along the way … 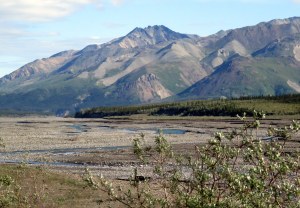 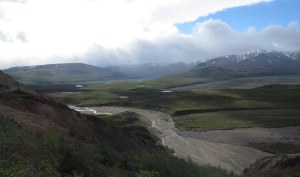 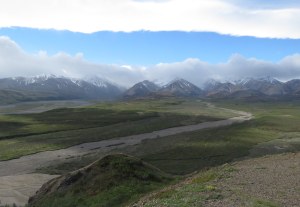 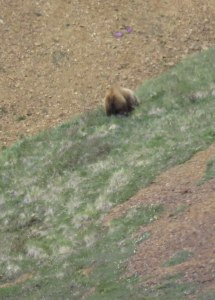 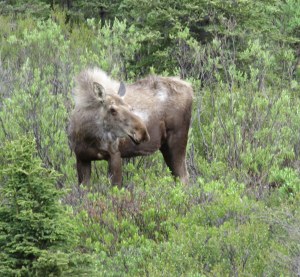 And Our View of the mountain… 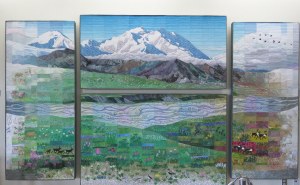 Quilt in the Eielson Visitor Center

Plant life …the bloom was starting

Birding was limited while on a bus, but we did see a Gyrfalcon (life bird for Michelle) as well as a Willow Ptarmigan – the state bird – and a Long-tailed Jaeger.  Plus several ducks were spotted in some small ponds near Wonder Lake.  Of course there were Mew Gulls at the Eielson Visitor Center.  Surprisingly we did not see any Golden Eagles, which are found in the park.

After our trip to Denali National Park, we intended to drive the Dalton Highway to Deadhorse (near Prudhoe Bay) and back, but the road had just reopened after being flooded for several weeks.  We had heard there were over 250 trucks waiting to make their way up the highway and we didn’t want to compete with all those truckers.  We hope to get up north next summer.  So instead we went birding along the Denali Highway in search of the Arctic Warbler and the Smith’s Longspur.  Got skunked by both birds.  Did see some nice birds however, including a Horned Lark (hadn’t seen one of those in Alaska in a long time) and a Rock Ptarmigan.

Along the Denali Highway 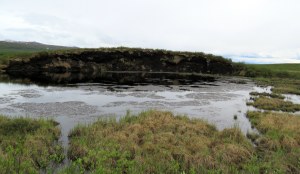 Some neat wetlands along the route …

… many which harbored ducks, including this Scaup sp. 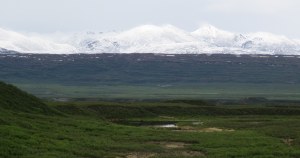 Fresh snow on the mountains and down quite far

It is beautiful though

And the road is mostly gravel and dirt, so the van doesn’t stay white for long

White-crowned Sparrows were checking out our campsite at Tangle Lakes. They liked getting into the fire pit searching for food.

Trying to get us away from the nest, which we never did see. 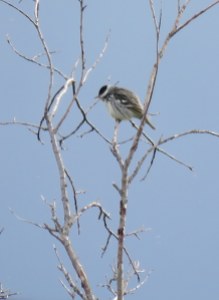 A Blackpoll Warbler. The bird was a fair distance away. 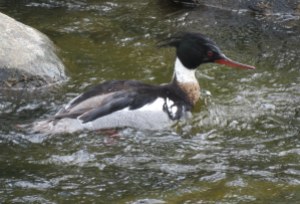 Don’t know the name of this plant species, but pretty.

Didn’t get our Smith’s Longspur, but did see  a male Rock Ptarmigan

We didn’t stay as long as anticipated since I caught a nasty cold upon our return from Barrow and didn’t feel much like camping or birding.  We did stop in Anchorage on the way home to do a little shopping, including at the Target store on “C” Street.  There we found a Mew Gull nesting on the Target sign.  With all the noise and traffic, I hope the eggs hatch and the chicks survive.  There is a small pond nearby – at the opposite end of the parking lot – but this seems like a strange place to nest. 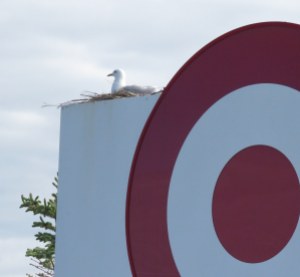 We do plan to visit these areas again next year, weather permitting.  With longer stays in both areas and a visit up the Dalton Highway.  So many places to see, so little time….

Remember, It’s A Great Day To Bird (or as Gary Lyon would say “Bird On”)