The Willow Ptarmigan is the Alaska State Bird but good luck finding one.  Jack and I are participating in a Ptarmigan Survey (Citizen Science Project) for the Alaska Department of Fish and Game.  We selected two sites to monitor – Ohlson Mountain and the Eagle Lakes Area (essentially the Parasitic Jaeger bog and the area surrounding the gravel pit).  We are outfitted with a GPS unit to map out our survey route and a portable Primos brand speaker (with the affectionate label of ‘Alpha Dogg’) that can blast out a recorded ptarmigan call for 1/4 mile!

We’ve done Ohlson Mountain twice already to no avail – no Rock or Willow Ptarmigan detected.  Of course we didn’t see much in the way of habitat for either species.  We did hear and see a lot of songbirds (American Robin, Fox Sparrow, Varied Thrush, Boreal Chickadee, Common Redpoll, Dark-eyed Junco, Ruby-crowned Kinglet, Gray Jay, Golden-crowned Sparrow, and Black-billed Magpie.  We also saw and heard a number of Wilson’s Snipes as they maneuvered through the air, a Belted Kingfisher flying by, a Bald Eagle (of course), Sandhill Cranes doing their unison call, and a Northern Harrier. 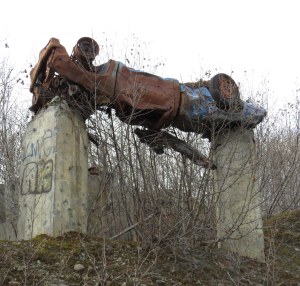 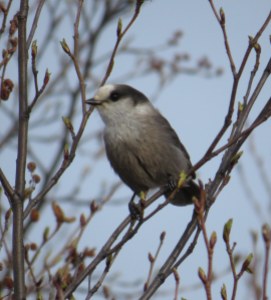 At the Eagle Lake Area survey site, we arrived one evening eager to begin the survey ONLY to find out that when we had completed the first Ohlson Mountain survey we forgot to turn off the Alpha Dogg speakers.  Now these speakers run on batteries so guess what – we had depleted the batteries.  A little hard to conduct call back surveys when you are missing the call.  Well I guess we weren’t totally without the calls as I could play my National Geographic bird phone app.  However, we didn’t have the same volume as we would have had with our Alpha Dogg speakers.  Since we were told the batteries would last long enough we wouldn’t have to replace them – assuming the unit gets turned off – we didn’t bring any additional batteries.  Live and learn.

We did decide to walk the road and try and locate our eleven (11) stations so when we came out here again we would be ready.  Between station 3 and station 4, I decided to play the bird app on my iPhone.   And to our surprise and great excitement in flew a Willow Ptarmigan male.  Beautiful bird. 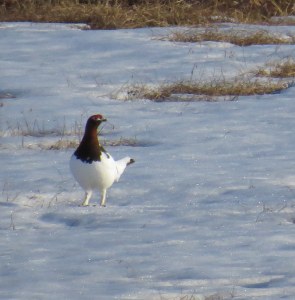 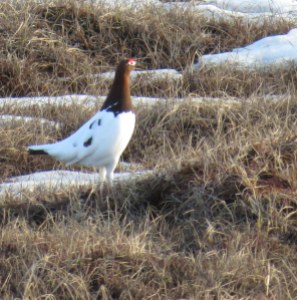 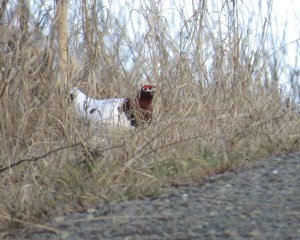 We also walked up the road to the gravel pit area.  And in flew three Least Sandpipers (shorebirds) feeding along some of the pools of water.  A little far from the “shore”. 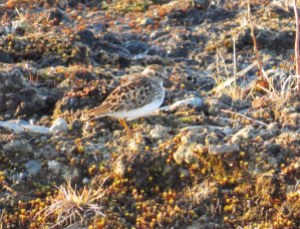 We had a beautiful night for a walk with a panoramic view of the surrounding mountains.  In addition to the Willow Ptarmigan and Least Sandpiper we also spotted American Robins, Fox Sparrows, Northern Harriers, Mew Gull, Glaucous-winged Gulls, Wilson Snipe, Sandhill Cranes (fly over), and Golden-crowned Sparrows. 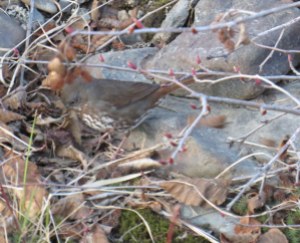 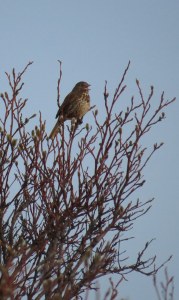 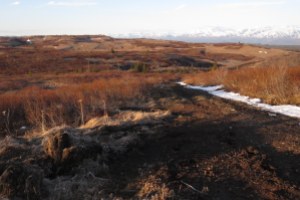 Despite not being able to conduct the Ptarmigan survey as planned we did enjoy a beautiful walk on a beautiful evening.  Will ‘charge up’ and return another day.