Its a Great Day to Bird

In Mid-November (on a gray and windy day), I spotted a Killdeer along the Anchor River. This is a surprise find at any time of the year. 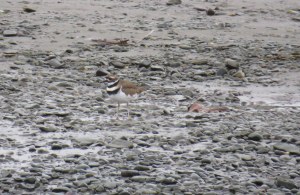 In the same general area were two Sanderlings feeding along the river.  They are a long way from their winter home.

A good size flock of Rock Sandpipers winter in the Homer area, feeding along the spit, and roosting in the boat harbor.  A smaller flock can generally be found along the beaches at Anchor Point.  The highest number I have  observed so far this fall has been around 70 or so.  These sandpipers at Anchor Point may be migrating northward to winter in Upper Cook Inlet.

As I was watching the sandpipers, a Northwestern Crow would fly over the shorebirds and flush them. The crow would then land and begin to feed. Guess the crow did not want the competition.  Further up the beach, more Northwestern Crows were feeding along the surf line, along with two adult Bald Eagles. The adult eagles were feeding on some dead critter, most likely a fish.

One of my favorite beaches for shorebirds on the Kenai Peninsula is the beach at Anchor Point.  I go there quite frequently year-round, although less so during the winter.  Winds can be be brutal, driving temperatures down.

I am at the beach monthly to perform COASST surveys for dead birds.  During my six years of surveys I have observed a number of different shorebird species utilizing this beach.   In the spring, I help monitor shorebirds as part of the Kachemak Bay Birders’ Shorebird Monitoring Project.  Next spring will the third year this beach has been monitored as part of that project.

Come and enjoy the shorebirds of Anchor Point beach.

It Was A Great Day To Bird – Snowy Owl!

Kachemak Bay Birders Get Out For A Great Day of Birding!